If you can donate any of the following please contact us by using the message system on the ‘join us’ tab.  Thank you 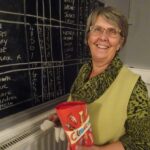 The Walkford Skittles Alley was the venue for a very popular evening’s competition.

Five teams of ladies enjoyed demonstrating their skills and indeed some left us all bowled over, notably Barbara, who achieved the highest score of the evening, and the winning team, Barbara, Gilly, Irene, Janice and Celia.

There was fun and much laughter as everybody tried to improve their score with each round. Joy invented a unique bowling method, which resulted in some success and imitation from her competitors! Pat did a wonderful job keeping score and checking when feet stepped over the line.

Thanks go to Ann and Diane for organising the event which proved to be right up our alley.

Every picture tells a story and there are many ways to create that picture.  Our Camera Club are keen photographers and Keith Thomas from the Highcliffe and Infinity photography club joined the Camera Club to give a talk and demonstration of Macro photography. Keith amazed us with his wonderful photos from mayflies to mushrooms, giving us an insight into the workings of our cameras and phones (yes you can use your phone). One of the most important things that was learnt, its not how good your camera or ph 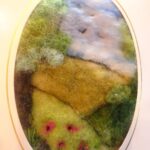 one may be, its the person behind the lens that takes a good photo.  Meanwhile, Crafty Girls were also busy learning new skills by creating pictures using the needle felting process where you stab wool and amazingly can create beautiful pictures.  Thanks are due to Pat for sharing her skills.  The other picture is, of course, the number of members participating, a picture of friendship and fun. 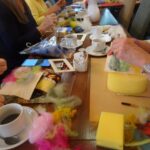 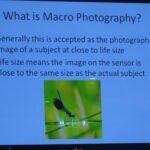 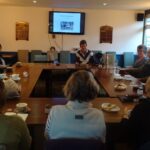 These are just a few adjectives that could be applied to our BEWI members.  This last month we’ve seen some interesting and talented entries to our competitions.  Our feature image may have had a few of us scratching our heads until we were told that we were looking at 4 beetles (not cockroaches) and, of course,  it was a Beatles song, The Long and Winding Road, which was the theme for October’s photo competition.  A truly inventive interpretation by Anne.

We were asked what luxury we would take to the International Space Station? 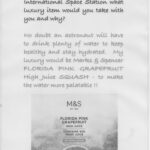 Sara had no doubts that she would need to take a luxury squash to drink and our judge, Bill Coombes agreed.

Every week emails fly out with all sorts of information, events and ideas for our members to consider.  So whether you wish to learn how to create a pom-pom wreathe; recycle with Christchurch’s Win on Waste or support and attend the Global Day of Action on Saturday 6 November 2021, there’s something  for everyone.  Jacqueline put pen to paper and wrote the following:

Come on now…is this just a sign of the times?

You tease with events that are so hard to rhyme.

What are the words that I could write beneath

A ridiculous ditty on a pom-pom wreath?

To find anything to rhyme with pom-pom.

That problem is small, but some are gigantic

The world’s getting hot, but it isn’t romantic

Are trying to come up with a climate change fix.

I hope that they realise it’s now very serious

Though the way MPs operate is often mysterious.

Flowers and dragonflies are still in here in November

It’s not like it used to be, if I remember

And though it seems nice, let it serve as a warning

We already have evidence about global warming.

We can all do it our bit, though our efforts be small.