19 members visited the Regent Centre, Christchurch for a Behind-the-Scenes tour. Opened as a cinema on Boxing Day 1931 for the modest cost of £25,000, in 1974 it became a Mecca Bingo Hall. 10 years later Christchurch Town Council bought it, a trust was formed and it returned to a cinema, plus live performances. 2019 was its best year – the Downton Abbey film helped, and it was named the most successful independent cinema in the UK. During the pandemic the trust were able to go ahead with a planned refurbishment, returning it to 1930s décor, and thankfully a grant from the BFI (British Film Institute) covered Covid losses. After a tour including projection box and back-stage we were treated to some black and white newsreels, adverts and trailers. We also saw the seats sponsored by BEWI. 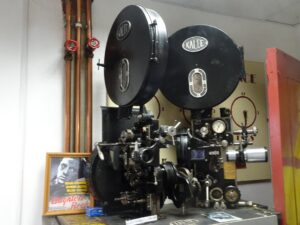 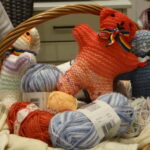 Knitting in the kitchen 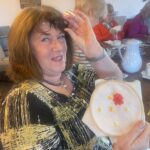